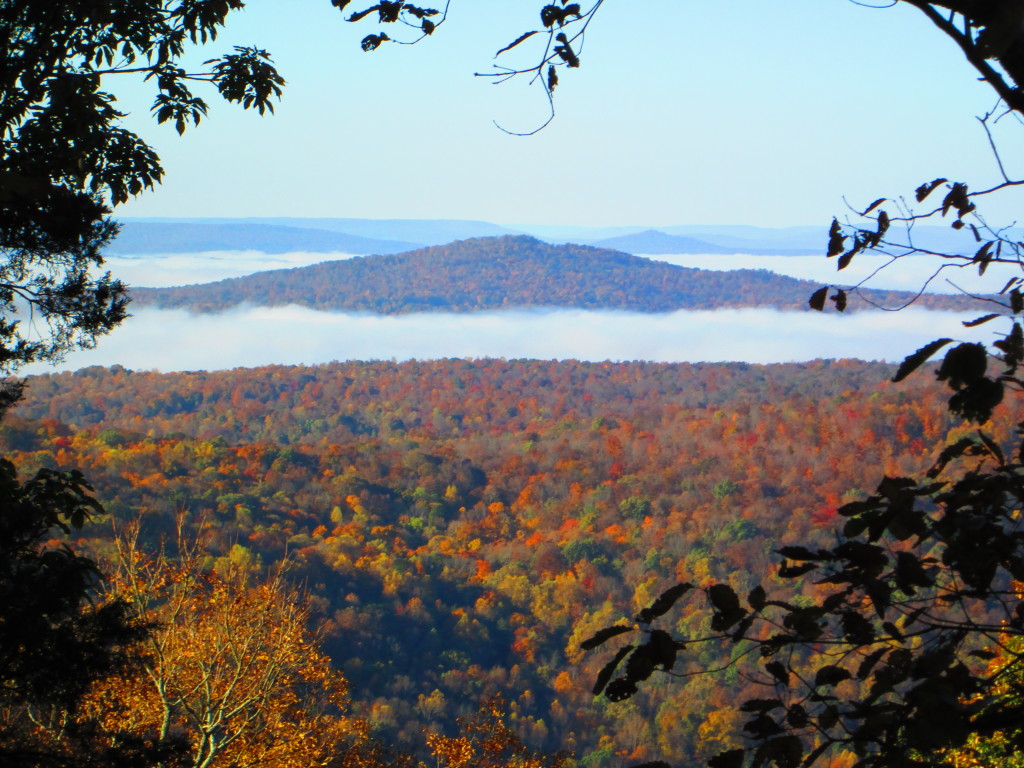 Milksick Mountain, , Island in the sky

Milksick Mountain, near Sparta TN, allegedly got it’s name when early settlers noted that those who consumed the milk from cattle grazing on this mountain often became ill; some died. Abraham Lincoln’s mother died of the same malady. At that point in White County history, land was open to grazing and people fenced their yards to keep livestock out. Enough people were harmed by the cattle that eventually the mountain was fenced off to keep the cattle from consuming the whitesnake root which grows along the slopes and results in tainted milk.

I once visited a pit in the side of Milksick Mountain and noted that many of the surrounding trees were damaged by lightening. Some of the scars on the trees had grown over, some were quite fresh indicating that lightening truly does strike the same place more than once. In the case of this pit, Elwin Hannah, a geologist friend explained that the ionized air emanating from the pit probably attracts lightening.

On a final note, and how suiting as we approach Halloween, I have often heard that Milksick Mountain is haunted by a witch. Many have reported hearing “blood curdling” screams along the mountainside at dusk. Some discount the shireking as a mountain lion – – or could it be someone who lost their life from drinking the tainted milk a long, long time ago?

I would love to hear any stories that you have to share regarding Milksick Mountain.

Leesia Champion added:  Near Doyle, there was supposed to be a headless horseman that haunts the road I live on Halloween night. One Halloween night I dressed up and rode my horse to scare the kids on a hay ride. My horse spooked so badly in that area I had to put her up.

Also the property that I live on used to be the old Iva Mason property. She came up missing and has never been found, but they say she was in my well. The last time she was seen was selling cattle and then nothing afterwards. Sometimes at night you can hear piano music – – she had played the piano.

Robert Sparkman added: Spent many a night up at the fire tower. We thought it was a Sasquatch. Heard some real weird stuff up there.

Steve Ware My Boy Scout troop 174 hiked cross-country from my house on Windsor Drive to the Fire Tower and back. We did it all by map and compass. Of course Dad, the scoutmaster, kept tabs on our navigation. It was a wonderful hike and lots of fun. Yert!

Karen Hyder LaFever My greatgrandfather’s farm is just south of Milksick. We live there now. My grandfather told many stories of the wild sound heard. He said he had heard many bobcats scream but none were like this. He told of a coon hunt on the mountain on night. The dogs were turned loose to search for coons. the hunters built a fire and sat around waiting for the howling to begin. All of a sudden he said everything got deathly quiet. Then out of no where a very cold breeze came through their camp and the fire went out. Their dogs appeared all of a sudden with no howling, only shivers. They heard this horrible scream and they all left the mountain quickly.

Tommy Frasier I lived at the base of Milksick in the late 80s. I heard some odd sounds.

Pam Hall My grandparents Frank and Elizabeth Goolsby lived on Milksick when their youngest son Donnie was born. He got sick from the cows milk. Grandma gathered fresh greens in the spring for a salad and they all got sick from them. Grandpa was giving her the dickens because he said she should know what was good to eat since her mother was a herb woman. They moved back to Sparta after that.

Carless Winnett our scout troop camped up there and we stayed awake all night waiting but nothing happened but we were ready to leave,used to take my girl friends there to,lol

Debbie Terry Ward This is the story of Milksick Mt as it has been told to me all of my life. The main thoroughfare from Sparta to Spencer was the Hickory Valley Road. A small circus came through the area and one of the “cats” got loose. The theory was it was a panther because of the scream. I grew up in Hickory Valley at the eastern side of the mountain. I do know the cattle or animals would not go near the mountain and the “scream” could be heard at night.

Kenneth Brogden has told about my grandfather, Joe Terry, going toward the mountain with the coon dogs and found him running back to the house as fast as he could go and the dogs were ahead of him. Kenneth did see an animal but it went back to the mountain as Pa got closer to home. This has been the general consensus of the event from the men of this era of what happened.