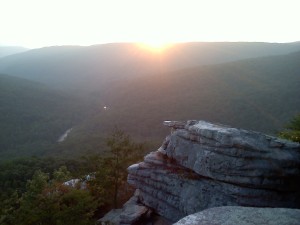 Welch’s Point. Note the gap between the main rock and the boulder.

One of the most under-recognized gifts that the state of Tennessee has ever received was in the form of a land gift from Bridgestone Firestone Corporation.  Located near Sparta TN this 11,000 acres represents the largest acquisition of land by the state of Tennessee since the Great Smokey Mountains. The property includes miles of headwaters of the Caney Fork River where the whitewater is so good people come form Asia and Europe to run the Class V. There is an abundance of caves, waterfalls, and scenic overlooks like nowhere else on the Cumberland Plateau. The property totally surrounds two other parcels which have since become state-owned. One is Virgin Falls, the second is known as Welch’s Point.

This adventure took place at Welch’s Point during September’s Harvest Moon.  Anyone familiar with Welch’s Point will appreciate this. There is a gap at Welch’s Point that gets you out to a big boulder which gives optimum eastward viewing. I went out there that evening in hopes of getting pictures of the Harvest Moon rising over Scott’s Gulf. I left my pack (including flashlight) on the main rock, and meandered down through the weeds to climb up on the big boulder. It got darker and darker, still no moon. Finally two friends texted me pictures of the moon from other locations and it became obvious that the moon rise was farther north and obscured by the trees. Thank goodness I had my hiking stick, there was still enough light to make out the light stone sides of the crevasse from the dark ground but that was it. Just in case, I was sweeping my walking stick ahead of me before I stepped. I hit what felt like a limp vine and I heard it. The other end of the crevasse is vertical going 100′ down. The sides going up at the highest point are maybe 15’; the adrenaline was like a shot of youth; for a moment my legs were 20 years younger, and my arms were about five feet longer, and I did what I’ve not done in a long long time. I went vertical. I literally went straight up the rock face, grabbed my flashlight from my pack and returned to the edge zooming in on this angry noise-maker with my camera. 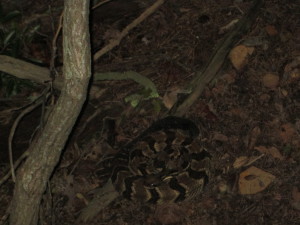 Two months ago, I had hiked to the same spot to get pictures of Scott’s Gulf under a bright full moon. On my return, I caught a glimpse of what appeared to be a bent stick in the road ahead. When I got closer,  I noted that it was bent the other way. That time it was copperhead, but I could easily see to maneuver around it.

I have probably hiked out to Welch’s point more than I have any other trail. I feel as safe there as I do in my own home. Here is my word of caution. No matter how familiar we are with our surroundings; wildlife is a variable that we often dismiss. In the case of the Bridgestone Firestone Centennial Wilderness, I have heard more reports of encounters with venomous snakes this year than all other years combined. I am sure that is partially because of the growing popularity of the area; I strongly suspect that it is also due to an increase in these reptiles as well. Rattlesnakes have been on the endangered-species list for decades, we might be seeing signs that they have rebounded. When we are in the woods, especially after dark, we are in their home – – be wary – – but isn’t that part of the thrill of being outdoors.