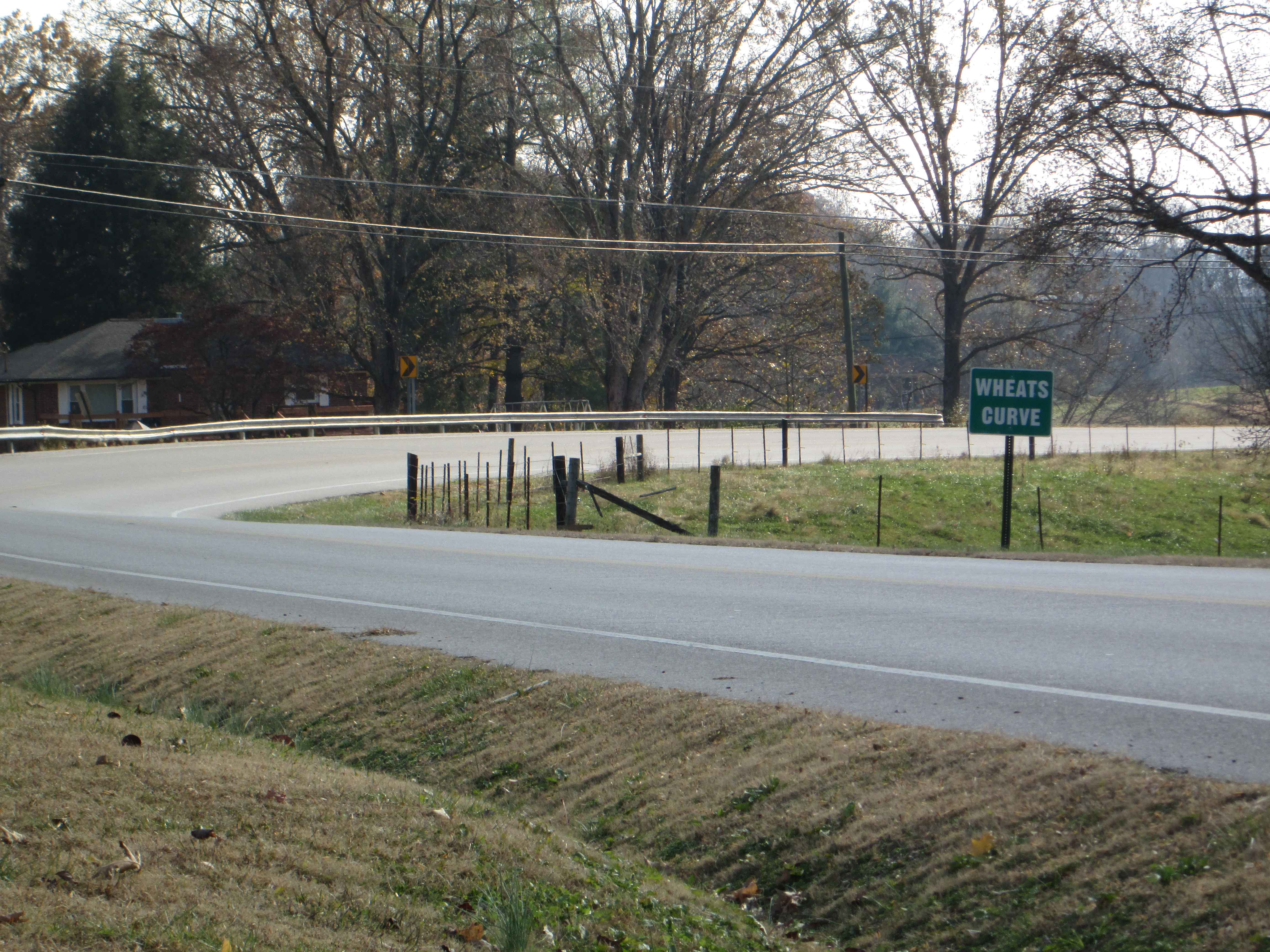 Wheat’s Curve, the rest of the story.  Just outside of Sparta TN,  There is an interesting twist in the highway listed on many maps as The Broadway of America. Also-known-as US 70, this was the first paved road in the United States to reach from the Atlantic to the Pacific.

As a rule, road builders try to make highways as straight as possible. So when you encounter an almost right angle in a highway, you know that there must have been a reason. This bend is so pronounced that someone erected signs announcing (or warning) its position. Dubbed “Wheat’s Curve” for the family of Morgan Wheat who lived along the cusp, this curve has continued to slow traffic for the better part of a century.

The alleged Wheat’s Curve speed record was set by a moonshiner who made the quarter-circle at 105 miles per hour. Interestingly, yet another segment of this same highway and still in Tennessee is where the story that became the movie Thunder Road took place.

Along with the sadness of the injured and the killed are a few anecdotes that have humorous twists. Ricky Mcbride remembers standing by the guard rail waiting for a school bus when a truck carrying pigs overturned unleashing startled swine that soon covered three subdivisions. Ann Holland recalls that incident and adds that the neighborhood children made sport of trying to catch the little pigs.  Carless Wiinnett remembers a similar day when a chicken truck overturned.

Civil Engineers spend years learning to calculate trajectory for vehicles likely to travel a given road so there must be a compelling reason to include a sharp change in direction at that locale.  We may never know for sure, but after studying maps of the area, and noting that the Louisville & Nashville

Railroad spur, that had been built decades before takes a similar turn in the same area; I think we might be able to deduce the reason for the curve. Apparently underlying geology resulted in these speed-breaking turns for both the highway and the railroad. White County Tennessee has more caves than any other county in the entire USA. Both the railroad and US 70 converge, just south of Sparta, on a ribbon of stable land bordered on one side by the Calfkiller River, and one the other by a huge, cave-induced depression called a “sink”.

Note the topo-map below. The contour lines illustrate elevation change. The contour lines that have tick-marks denote the geologic anomaly known as a sink. The tick marks point inward, and as you can see, this sink is probably over 3000′ long. Sinks are avoided for construction purposes because they flag unstable earth. Engineers for both the railroad, and the highway sought to avoid the mountains to the west, the river to the east, and at all cost, they skirted that unstable land in the sink. The cost of avoiding those three natural wonders was a temporary reduction in speed on both the rail and the pavement. 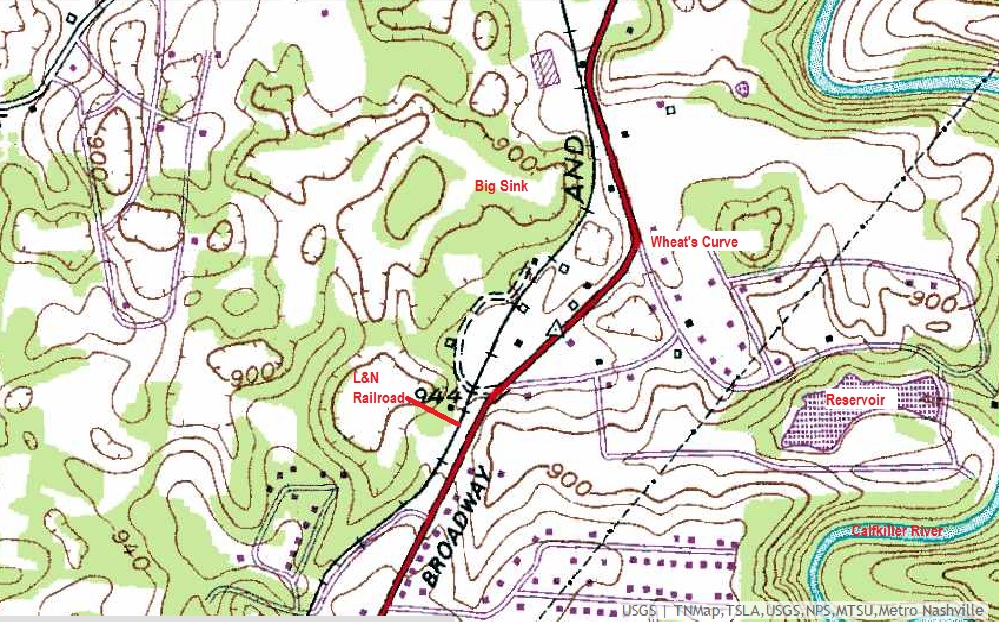 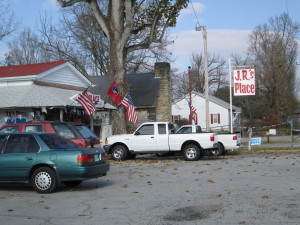 One more good reason to slow down at Wheat’s Curve is JR’s Place. Known for ages as Webb’s Package Store, and operated for decades by WWII POW, Carl Webb and wife Margie.  Jimmy Ray Cantrell purchased the business last year and has converted it to a friendly tavern complete with a great selection of brew, karaoke, and various entertainment offered by local talent. I suggest that you try the “Third Shift” beer, but watch out for the boiled eggs that are soaking in napalm – – but I guess that fiery flavor sells a lot of brew. 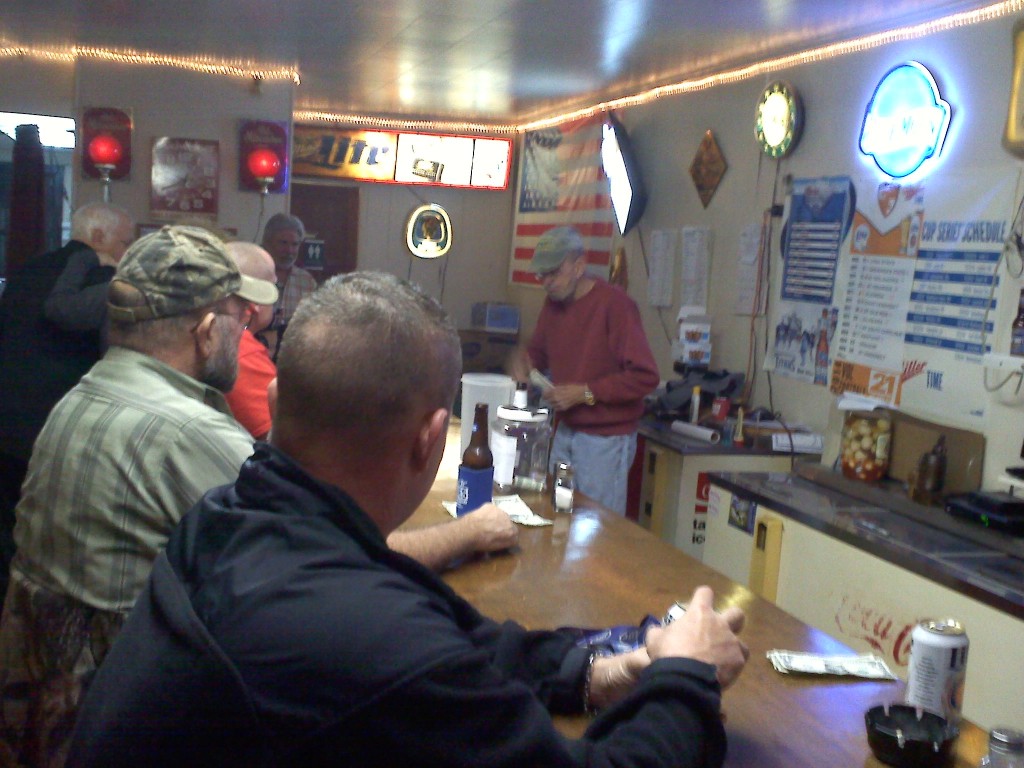 5 thoughts on “What’s the story behind Wheat’s Curve?”