What’s in a name? In this case, the name Mill Hole says it all. There was a grist mill in a huge 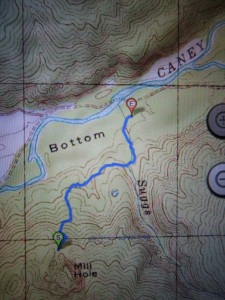 sinkhole on the side of a mountain above Big Bottom and across the Caney Fork River from Virgin Falls and not far from Sparta TN. I had thought that I had meandered over every acre of soil from Clifty to Lost Creek. Years and years ago, I went on a trip to Mill Hole Cave, but we stopped at the cave entrance and didn’t descend into the bottom of the sink. Then a few months ago, I was perusing a topo map and was reminded of the cave trip. Looking closely at the topo I realized how large this sinkhole is and that there was probably much that I hadn’t seen at that site. So off I went with a friend, Mike Oneal as a guide, to see the rest of this karst depression. If you’ve never visited a sinkhole, think of it as a concave mountain. No matter how you approach it, there are steep slopes only now you are faced with the return trip requiring an often grueling climb up, rather than gravity helping you return , it is battling you all the way back. 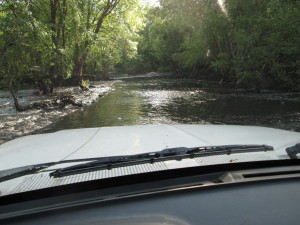 Fording in the Ford. Stay close to the break that you see to the left in this photo; the water a few feet upstream is much deeper.

From Cragrock, you approach Mill Hole through Lost Creek, Big Bottom, and cross the Caney Fork River – – nope, not at the bridge; through the river. Beware, if there is any threat of rain, you could find yourself stranded on the far side of the river for several hours or maybe even days. What appears to be a docile mountain stream, can quickly become a raging torrent that has been known to uproot houses and wipe out bridges. In a major storm, the river can become impassable in minutes.

With four-wheel drive, and a little extra ground clearance, the road isn’t too bad. In places, the river rock looks much like cobblestone and any speed faster than slow, it can shake you up pretty bad. While you are driving on this road, keep in mind that in days past, this was the main street going into a milling community named Dodson. Other than a few foundation cornerstones, nothing remains of the village and it is another one of those places where I remain in awe that anyone was ever hardy enough to reside there. 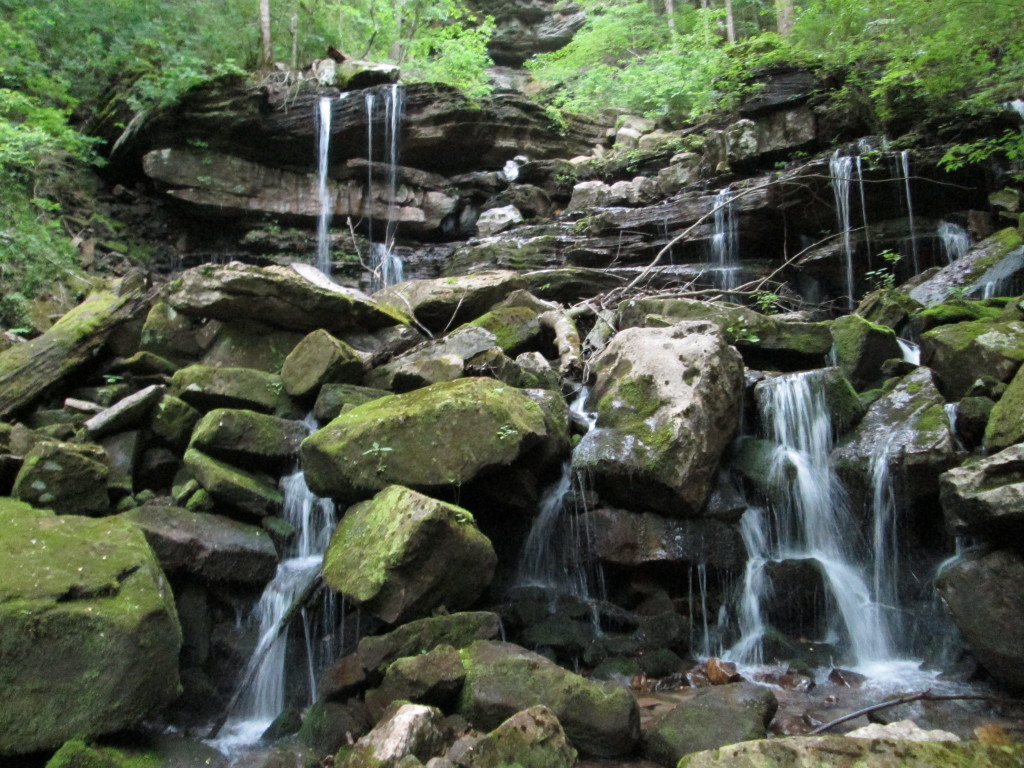 There is nothing here for scale, but this cascade has about a 60′ drop and lots more water than what this photo implies.

About a mile past the river, there is a side road that forks off to the right. Sally Gap Road even appears on some maps. The Mill hole is closest to Sally Gap. Lest you envision Sally Gap as a maintained road, it is much worse, narrower, rougher, and less maintained than the road along the river where you ford the Caney Fork. Presently, Sally Gap Road is more of a path where a few four-wheelers may travel, but with great difficulty. I think that hiking is a better way to deal with the fallen trees, and eroded trace of what was once designed for horse traffic only.

There is enough water flowing into Mill Hole that you can hear it from Sally Gap as you hike up. I was watching the GPS as we approached and assumed that there would be a trail into the depression – – NOT!  We walked a good portion of the perimeter before we conceded that we would just have to take a guess and plow into the bush knowing that from whatever direction that we approached, our destination was going to be DOWN. 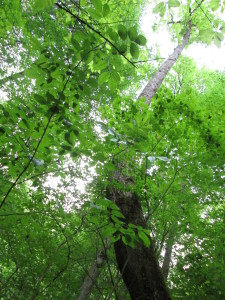 Bent Tree? This is the largest one that I have ever seen.

It is a treat to find a place that is so seldom visited that there are no trails. This property was purchased by the state a few years ago from a timber company. As you make your way to the sink, the trees are pretty skimpy; what a pleasant surprise to find some old growth close by. The loggers probably didn’t want to risk loosing a skidder, even for some of the giant hardwoods that stand in the bottom.

Much like neighboring Virgin Falls and Lost Creek, water comes out of the side of the sink, and disappears farther down inside the same sink hole; but this hole is much deeper, and wider than any of it’s neighbors. The flora that gives way quickly in areas less remote and therefore more traveled are quite intact. I suspect that the thermal boost coming from the cave is the reason that the ferns are so much larger than those only a few hundred feet away – – they have a longer growing season.

The volume of water coming into this sink is not as great as Virgin Falls or Lost Creek, but the depression is deeper and the “pristineness” of being so far off the beaten path that we may have been the only humans to visit this year certainly made it worth the trip. 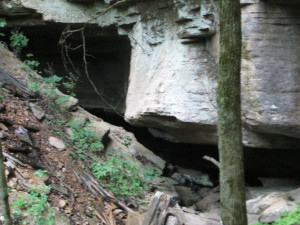 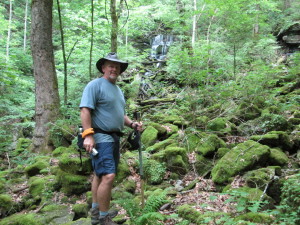 Mile Oneal with the cascade in the distance. 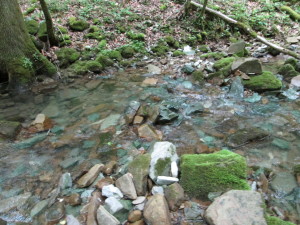 Note the peculiar color of the limestone. 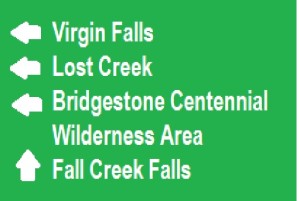 Fall Creek Falls State Park draws over one million visitors per year, the majority passing through Sparta on Hwy 111. What would it do for the businesses in downtown Sparta TN if they had one-tenth of that traffic driving through town?  Baxter Tennessee reports that they are collecting 20% more sales tax out of one location that is directly attributed to the three-year-old Cummins Falls State Park.

If someone has two hours, they can see Lost Creek. If they have all day, they can visit Virgin Falls. If they have several days, soon they will be able to walk in at Lost Creek, and walk out at Fall Creek Falls and have more waterfalls and scenic overlooks per mile than any other park – – perhaps  anywhere in the US. What kind of draw do think that will be? It will dwarf Cummins Falls.

Please share this with all Sparta groups and friends. If we get enough people talking about it, perhaps it will get done. Tourists are a great industry, they come, they spend money, they leave. 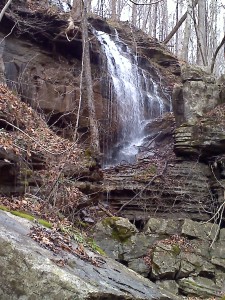 One of the closest trailheads to Cragrock aka, Sparta TN, is Rylander Cascade Trail. Rylander was the name of the family who gave us Lost Creek falls and cave. In fact, you park in the Lost Creek parking lot and head south on Lost Creek Rd toward Big Bottom to get to the trail. The official trail is a short easy stroll on an old roadbed along Dry Creek. Let me emphasize the word dry in Dry Creek. When you get to the trail, the dry creek bed going under the road would make you think that  the falls would not be flowing that day – – there is a reason that they call this area Lost Creek; it is riddled with streams that emerge from caves, flow a short distance, and then disappear into another cave. You can add Rylander Cascades to this list.

As you hike up the gentle slope, stop and listen on occasion; prior to getting to Rylander Cascade, twice I heard the distinct sound of water plummeting along the hill on my left. Upon investigation, I found two smaller falls/cascades that come out of the hill, run a few feet and disappear into cracks in the valley floor. Rylander is the third and largest of these micro-water-water-falls.

I am not recommending anyone else going past Rylander, the trail ends at the cascade; but I could not resist hiking farther up Dry Creek.  The creek that is dry at the road and still dry when you get to the cascades, is quite wet as you get closer to the top of the mountain. It too, disappears and reappears a few times along the way. It is not a huge volume, but I’ve been back three times and I have NEVER seen it empty and it is ohhhhh, sooooo, clear. Happy Hiking. 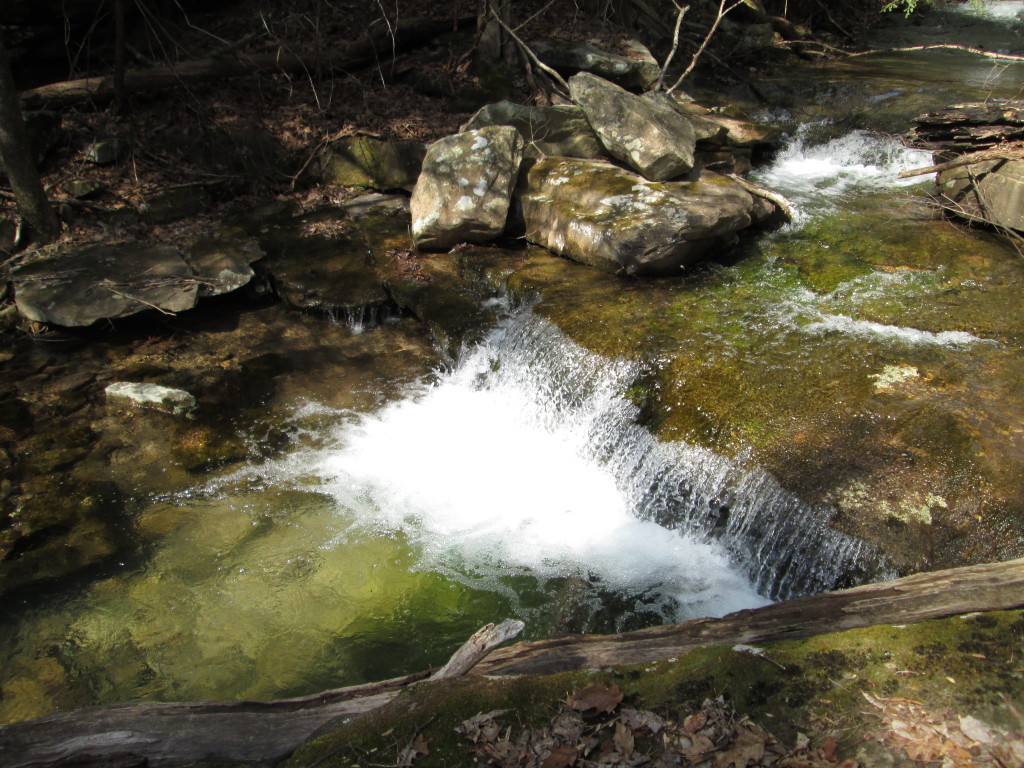 A wet spot in Dry Creek