On the far side of the plateau from Cragrock, lies what has been described as the single-most prominent geologic feature along Interstate 75 between Sault Ste Marie, Michigan and Miami

Florida. Scientists say that this feature was created when the North American and African continents collided. Current estimates place continental drift at a whopping 8/10 inches per year – – which indicates a very long time ago.

The collision caused the plates to split and in the case of “The Devils Racetrack”, they were turned vertically. Over time, the softer rocks dissolved leaving these giant stone slabs protruding vertically above the surrounding hardwoods. It is absolutely astonishing to see and can be viewed from I-75, just north of Caryville.

The lake at Tennessee’s oldest state park, Cove Lake, was constructed to act as a reflecting pool for this mountain. When viewed from the park, there is a serene beauty. Standing on top lends a whole new meaning to the word panorama. 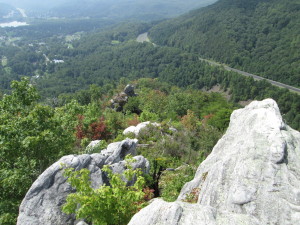 Looking down, you can see Cove Lake State Park.

The Cumberland Trail runs with I-75 and then along the ridge through the Devil’s Racetrack feature. Round-trip from Cove Lake is a moderate day’s hike and one of my favorites. The intense mix of forest vegetation, wildlife, and gradual slope overcomes the noise from the interstate; nature and infrastructure collide – – but the scenery wins. I’ve stood on top and looked down on clouds, birds, and even aircraft.

This is just one more example of why when you live on the Cumberland Plateau, you don’t have to leave home to take a vacation. 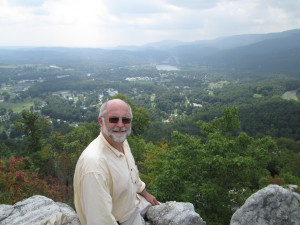 Straddling one of the stone spines at Devil’s Racetrack. 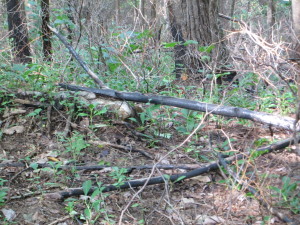 The property is recovering nicely from a forest fire only five months ago. 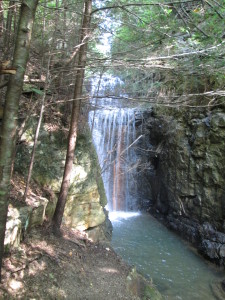 This beautiful double-drop waterfall is quite unique in that it was man-made when the stream had to be re-routed to build I-75. Note the vertical boring marks on the right cliff face.