The Top of Bon Air Mountain, near Sparta TN, was once home 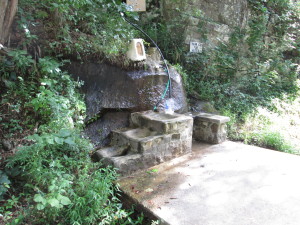 to a wonderful lodge. Only verbal descriptions of that lodge exists today, but apparently it was grand. Porches lined the perimeter of the lodge and it was positioned on the western-most point of the Cumberland Escarpment. Built close to the bluff’s edge, the lodge afforded fantastic views of the Tennessee Valley below. The popularity of the lodge wasn’t solely for the traveler’s of the Old Stage Road, the waters from the Bon Air Spring allegedly had healing properties. People literally came from adjoining states to bathe and drink the cool water from the spring. All that is left of the lodge are a few cornerstones; it fell victim to the Civil War; both sides claiming that it was a haven for spies – – it was burned to the ground and never rebuilt.

The county has created a pull-off to keep people from blocking traffic on the road while retrieving water from the spring.  In 2004, Junior Forsyth and Carmon Hamby poured a concrete pad with culvert and concrete tables to rest the water jugs as they fill. A local reports having had the water tested; he was told that municipalities would be proud to have water that pure coming OUT of their filtration system. Regardless of rain or season, it takes about two minutes to fill a gallon jug. 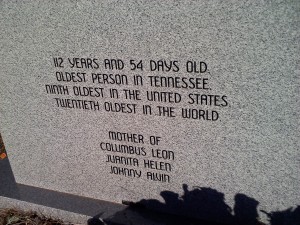 It is not unusual to find people waiting in line to capture Bon Air water. Perhaps, at one time, one of those people was Shell Roberts Nyleptha Matilda Bryant. When she died, Shell was the 20th oldest person on a planet of seven billion people.  She grew up on Bon Air mountain, worked and played in the farm fields; now she rests about a half-mile from the spring in the Old Bon Air Cemetery.

No one can say for sure that drinking the water at Bon Air resulted in Shell’s longevity; but I will confide, while I’m writing this post, I am sipping on a glass of that water – – just in case.