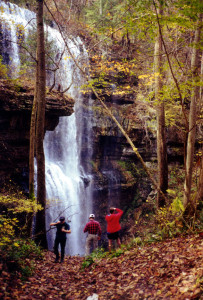 Virgin Falls, near Sparta TN, is the crown jewel of trekking beauty. The creek feeding Virgin Falls comes out of Little Chestnut Mountain, runs about 150 feet, plummets 110 feet, and disappears into the same mountain from whence it came. Rumors have it that no one knows where the water comes from or where it goes – – I know the source and hope to be able to announce it in the upcoming months. Perhaps, one of the most unique things about the lack of a visible creek entering or exiting Virgin Falls – – is that Virgin Falls is not so unique; there are four other waterfalls within five miles that similarly do not have streams leading to them, or out of them. The second most popular is known as Lost Creek, the falls where the remake of “The Jungle Book” was filmed.

Part of the intrigue about visiting Virgin Falls is the considerably-rugged 4.8 mile trail leading to the namesake of this wilderness area. The first third of the trail is rough which unfortunately makes the last third even rougher. The majority of the 1300’ elevation change that takes place along this trail is within the first 1.5 miles of the trail head. Thus, when returning, you are climbing out the last third, not to mention the first mile includes a stream that is often not fordable without getting wet. 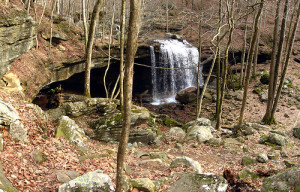 One saving grace about this rugged trail is that there are two more attractions that you encounter while venturing to Virgin Falls. either of these attractions alone would make it worth the trip. The first is Big Laurel Falls. Big Laurel Falls is the result of the above-mentioned stream that just drenched you while you were fording it, dropping over the mouth of a sizeable cave entrance and disappearing into that cave – – thus there is no downstream after the falls – – and this is often a huge volume of water. 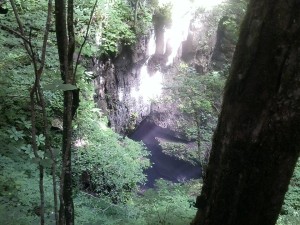 The second “main” attraction along the trail is Sheep Cave. Sheep cave rests in a mysterious looking sink that somehow invites you to drop off the main trail and check out the bottom. The descent is steep, but can be done without rope; however, you are going to wish that you had a rope on the return.

Lastly, is the waterfall that gave this wilderness its name, Virgin Falls. There has not been a season when I’ve seen this falls that it is not spectacular. Once, in the winter it had been below freezing for five days. The trip in was almost like a black and white movie; mostly devoid of color. But, with the leaves off the trees you get to see some beautiful karst topography that you don’t get to see otherwise. And, after several days of temperatures in the teens, the mist rising off the warm water from the cave freezes on every plant stem within thirty yards of the falls. When the sun hits it, it is like looking at a giant glass menagerie and sometimes the refraction is blinding. 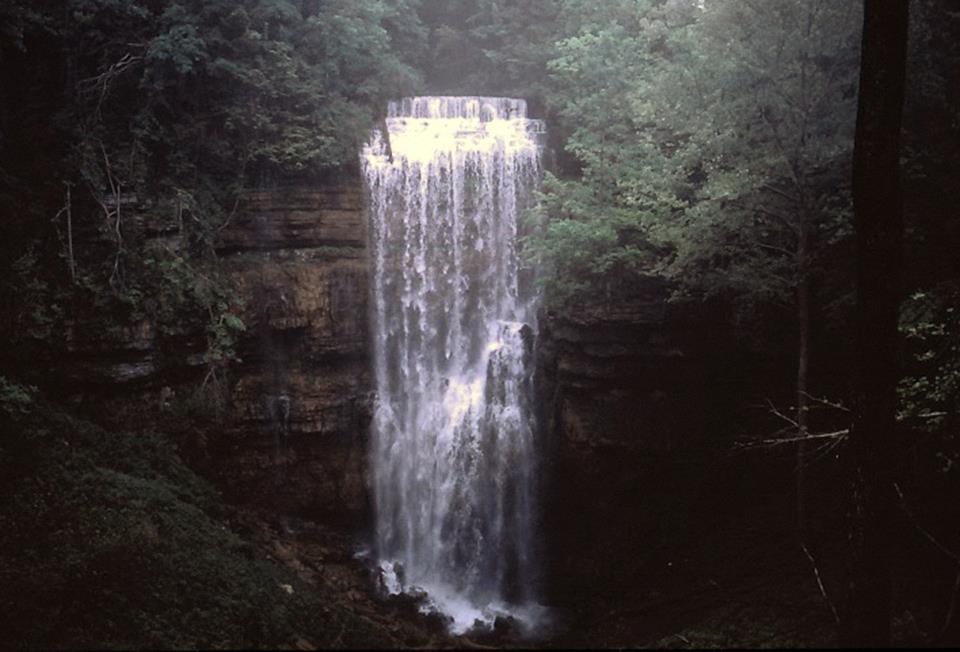 “But wait, there’s more.” There are three more side attractions that you should see while you are at Virgin Falls. The first is, while at the main falls, take a few minutes to hike down to the headwaters of the Caney Fork River – – if you are lucky enough to have a fishing pole, even better. The second side-track is  a spur trail that leads off the main trail up a steep ascent to Martha’s Pretty Point. Finally, when you have made it back to your car – – exhausted; turn right out of the parking lot, follow the fork to the right about four miles and visit Welch’s Point; this is one of the most spectacular overlooks in Tennessee and has only recently been opened to the public. Now, you can drive within 400’ of the escarpment – – especially a blessing if you’ve just come off the Virgin Falls Trail. 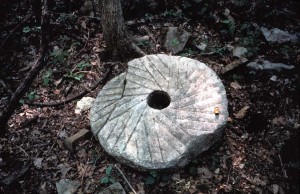 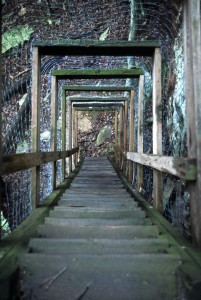